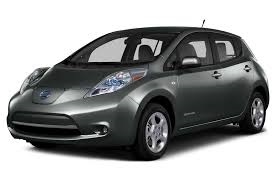 We Bought a Leaf! Are We Still Happy?

Last year I wrote about our exciting new purchase (actually a 2 year lease). No, not a zoo, but an electric car. We've now been Leafers for over a year, so it's time for an update. How's it going?

The Leaf is surprisingly fun to drive. Seriously. Car guys (and a few girls) talk a lot about horsepower, but acceleration comes from torque. In a gas powered vehicle, the engine revs to around 3000 RPMs to hit maximum torque. Step on the gas, the engine whines, and then off you go. Electric motors are different. They operate at maximum torque at all RPMs, including 0. Step on the gas, off you go, then the engine whines. The Leaf has so much torque that we're almost in need of new tires at just 15,000 miles. And I never lose a stoplight battle. Or go over 80 MPH, but that's a horsepower problem...

Range anxiety is mainly a myth created by non-electric car drivers, probably funded by the big oil companies. The actual range varies quite a bit based on driving style. Moderate speeds on back roads, expect 90 miles on a single charge. Moving out at highway speeds, you'll push it to get 70 miles. With a bit of foresight, it's pretty easy to plan routes to optimize range and time. Most days I clock fewer than 30 miles, so it's not an issue. A few days I've driven over 120 miles and come home with a nearly full battery. The key is learning where to find the fast chargers (there's an app for that) and planning accordingly. Clearly this is not a road trip car.

On the inside, the Leaf is a pretty normal car. Satellite radio, heated seats front and rear, heated steering wheel with radio controls, power windows, airbags galore, just like everyone else. It can seat five for short trips, although four is a better fit. Storage space in the hatchback is fine.

So what's wrong with it? Other than being hideously ugly (in the eyes of some, but not all), not much. It's not a luxury car, so don't expect a quiet highway ride or a triple digit top end. It's a bit tinny overall, but fully functional.

Driving the Leaf daily for over a year has served as proof of concept that electric cars are definitely a viable option. As ranges increase (150 miles would be great, 200 miles unbelievable) and the charging network builds out, the viability will increase dramatically. The major auto companies seem to agree and expect to roll out nearly a dozen new and improved models in the next few years.

What's next for us when the lease runs out? I'm having a major left brain v. right brain conflict right now. The logical Left brain is building spreadsheets to support another electric car or perhaps hybrid - something practical like a Tesla Model 3, Toyota Prius, or Honda Accord Hybrid. The emotional Right brain is putting together a multi-media campaign with the buzzwords fast, stylish, and loud. I'll let you know which half wins!

Still uncertain about your next vehicle purchase? Give us a call or email, we're always happy to spend time talking cars instead of portfolio returns and Social Security strategies.